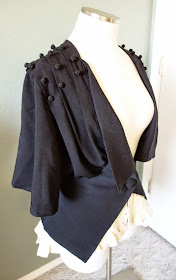 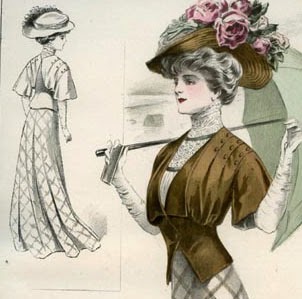 For the next installment of my Edwardian half-mourning dress series, I thought I'd show you some of the construction details that went into my jacket. The jacket was the part of the inspiration fashion plate that really captured my imagination and made me want to recreate this outfit. I love the quirky transitional styles from the end of the Edwardian period, and this jacket has such a cool combination of crisp tailoring at the waist contrasted by soft volume at the bust. It definitely wasn't easy, and I can see some things now that I wish I had done differently, but was such a fun challenge and I learned a lot along the way.

To get started on this project, I searched through everything that I could think of to see if I could find a period pattern diagram for a garment with a similar shape. I couldn't believe my luck when I discovered that one of the La Mode Pratique magazines in my collection had a full sized tissue pattern for a blouse with a similar fitted bottom and blousy top. This pattern dated from 1914, so it was 6 years later than my Edwardian inspiration, but I loved that they are both from the same magazine, and if nothing else, it gave me a place to start. (BTW, I'm dying to make up a version of this 1914 blouse at some point in the future too!) 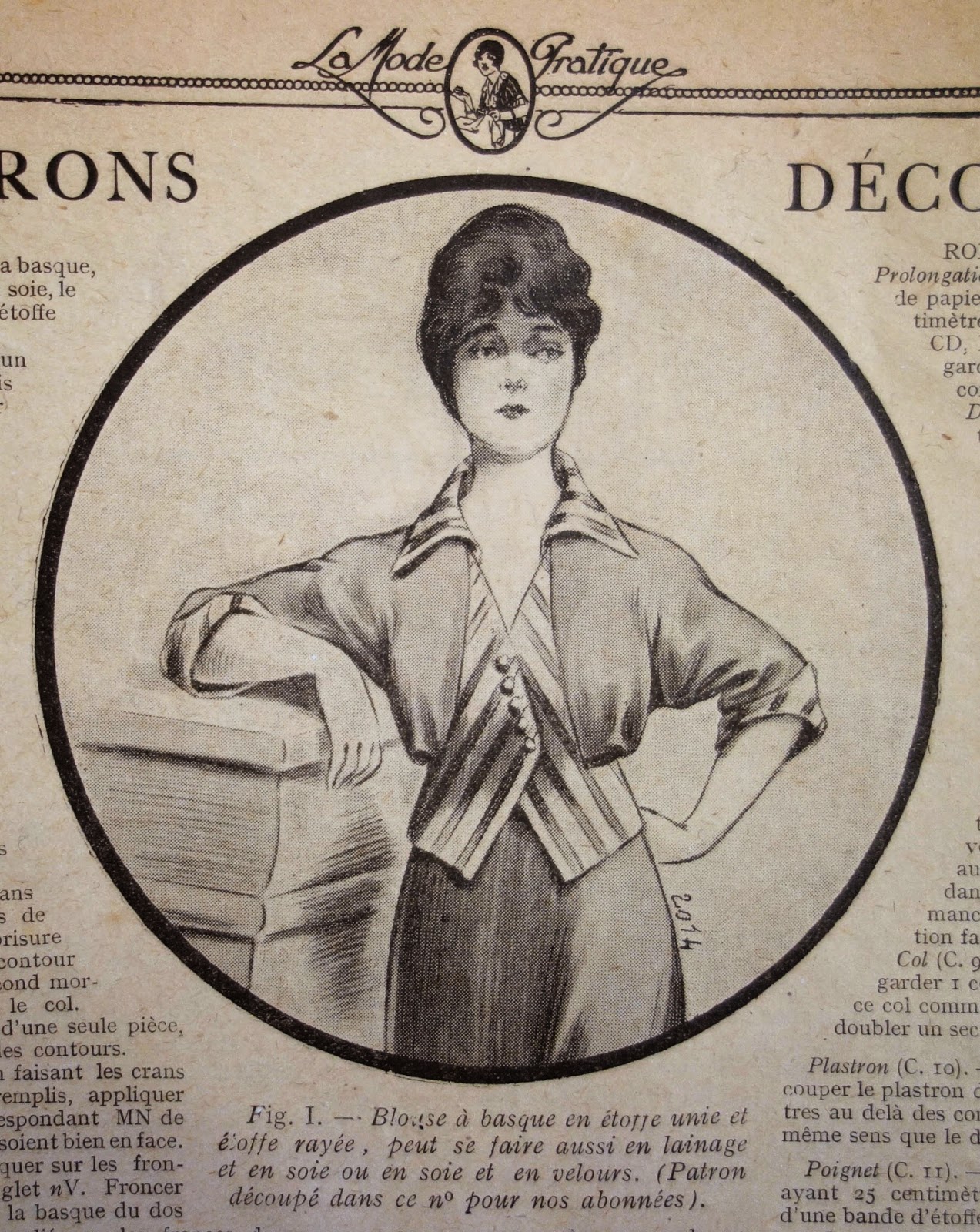 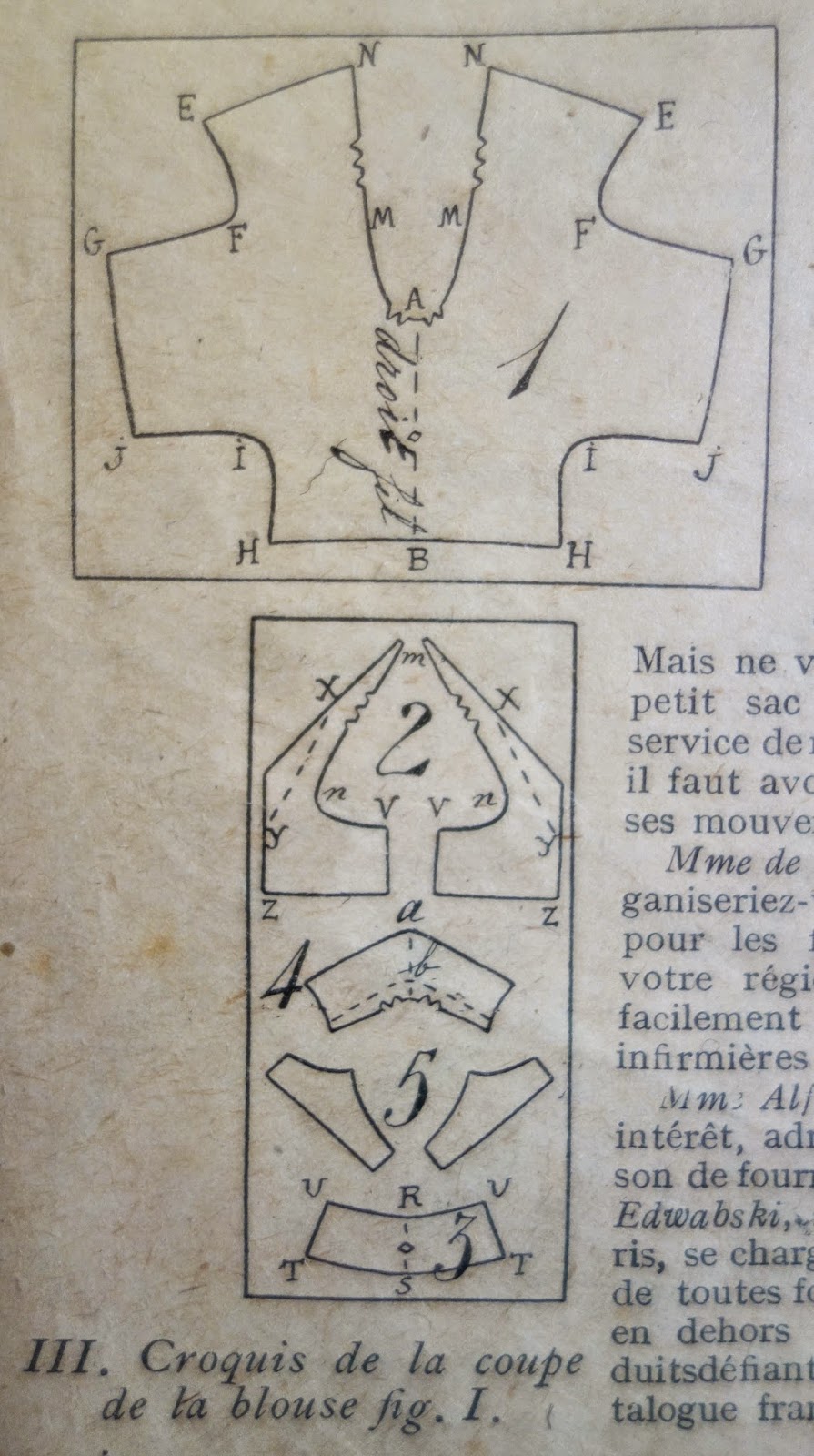 The next step was make a mock-up and then use draping techniques to alter the 1914 pattern into something that was closer to my goal. The Edwardian jacket has a different style of collar, pleating on the shoulders, a strange point up the center-back, and a bell-shaped sleeves instead of tapered ones, so the pattern ended up looking a LOT different by the time it was done. You can see my final pattern pieces laid out flat in the picture below. What a weird shape! 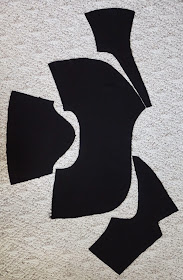 I made this jacket out of fairly lightweight wool, so I decided to interline the entire bottom section with hair canvas to give it more structure.  I attached the hair canvas to the wool with lots of rows of tiny prick stitches at first, and although you couldn't see them on the wool side, I ended up chickening out and removing a lot of them in the end because it caused some slight puckering when the jacket curved across the dip in my waist. I also pad stitched my lapels, which helped them roll a little better. You can see one finished lapel at the bottom of this picture with a strong roll line compared to the un-stitched collar in the background, which still lays flat. All of these tailoring techniques are covered in Gertie's Lady Grey Sew-Along, which is a wonderful place to learn about tailoring techniques. 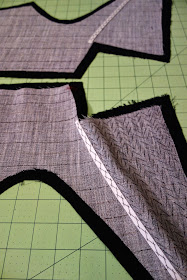 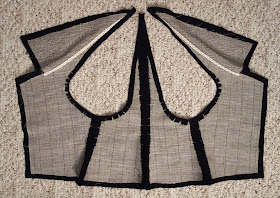 Once the hair canvas was attached, I assembled the bottom section of the jacket and whipped down the seam allowances. It was finally starting to look like something now, but still so odd! 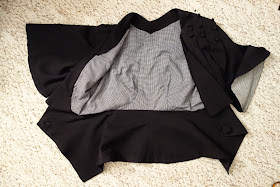 For the top of the bodice, I made a fitted lining from checked cotton, then I pleated and gathered the wool shoulder pieces and basted them to the lining to keep everything stable. Then I top-stitched the bottom half of the jacket on top of the gathered section. Unfortunately, this is where my photo narrative fell apart. I was too frazzled and tired to remember to take pics on the night it finally all came together, so you'll just have to use your imagination for the last few steps. But I do have a pic of the inside of the finished jacket, which shows the fitted lining  and the inside facings that hide all the raw edges.

The final step was to add 36 small cord buttons to the pleats on the shoulders, and one large button to the waist. After seeing some really cool antique cord buttons online, I decided to try making one myself.  I took a fabric covered button and wrapped it with soutache with a simple basket-weave pattern in the middle.  It was was a quick and easy project compared to the more complicated Dorset and death's head buttons that I've made in the past, but the techniques are all very similar. I also covered the bound buttonhole with some more soutache just to give it a little extra embellishment. You don't notice it very much in all that sea of black, but it still makes me happy that it's there. 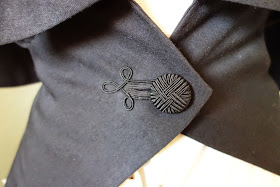 Here are a few more very over-exposed shots so you can see the details of the jacket, and check back later this week for info about my Merry Widow Hat of Awesomeness(!!!) and some pictures of all the pieces together for the final look. 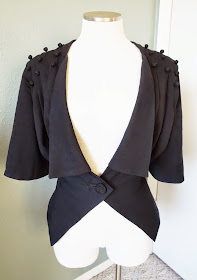 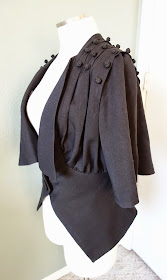 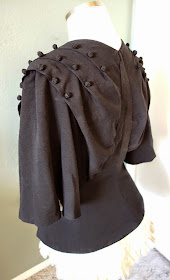 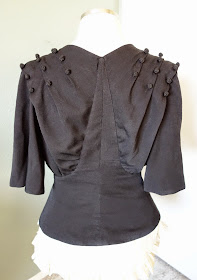 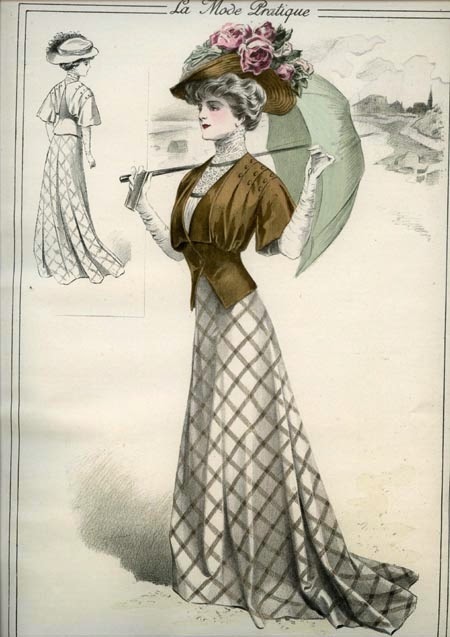 The next big event that I have on my lineup is a Mourning Tea Party with the DFWCG in late October, so I decided to make an Edwardian half-mourning gown inspired by this 1908 fashion plate from La Mode Pratique.  Although the original plate wasn't intended to be a mourning outfit, I thought it would translate well to half-mourning if I switched the brown colors to black and left off the flowers on my hat.

This is a new era for me, and I'm having to build quite a few costume pieces in order to make it come to life, so I thought I'd break this project down into a few different blog posts so I can talk about each garment in more depth.  Actually, the true beginning for this series was with my Atelier Sylphe Edwardian corset, which I posted about two months ago.  After making the corset, I moved on to three additional garments that I could make from commercial patterns.  I'll start  by sharing some more pattern reviews and give you a few sneak peeks at what I've finished so far. 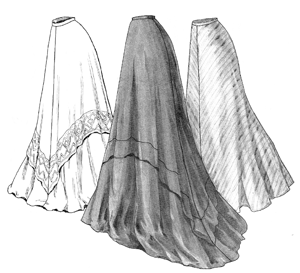 My first step was making the skirt, and for that I used the Truly Victorian 1905 Circle Skirt.  I'm a pretty huge cheapskate, so at first I thought about drafting this pattern myself to save some money.  After all, it's just a big half circle, so how hard could that be?  But then I came to my senses and remembered what a colossal pain it is to draft and fit large curved pattern pieces.  I am SO glad that I decided to buy this pattern in the end!  It saved a huge amount of time and aggravation for me.  Yes, it's a really simple pattern shape, but the massive size makes it tricky to work with.  I think it took longer to clear out a large enough section of floor and smooth out the fabric for cutting than it took me to cut out and assemble the entire skirt.  I was very pleased with the way the waist and hips fit (looks better on me than my non-curvy manikin), and it has a lovely sweep to the back. Definitely a good pattern to own. 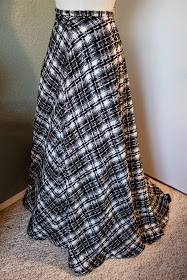 I made a bit of a theatrical choice with the plaid that I chose for my skirt because I fell in love with some black and white boucle of unknown fiber content and authenticity.  I was worried at first that plaid boucle wouldn't be documentable for the Edwardian period, but a Google Books search came to the rescue, and I found over a dozen references to plaid boucle fabrics from the late Victorian period and the early decades of the 20th c., such as this reference in a 1903 Dry Goods Reporter stating:

So even though I haven't found any examples of plaid boucle fabric exactly like this one in Edwardian photos or surviving garments, at least I know that the concept was something that they were familiar with.  Unfortunately, that still doesn't solve the fiber content issue, but "shhhhh"... I won't tell if you won't.  ;)

Because the skirt was so fast and easy to assemble, I decided to also make a new petticoat to wear under it using the same circular skirt pattern.  This time, I cut off the bottom 14" from the pattern and added a ruffle of eyelet fabric that came from a bedskirt that I picked up at an estate sale.  This made assembly even easier because the flounce was pre-gathered, and the whole thing only took me about an hour to make from start to finish. Nice! It's not the fanciest thing in the world, but I think the extra layer will help hold the demi-train out, and combined with a few other petticoats, it should give the skirt a pretty nice shape.  Once again, this circular skirt pattern really paid off. 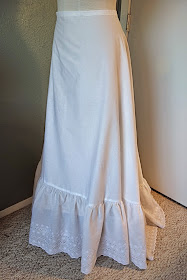 The other pattern that I tried out for this project was the Folkwear Gibson Girl Blouse, which I used to make a guimpe to wear under my jacket. This pattern only cost me $1 at a recent antique show, so I was super excited to give it a try.  I used some antique eyelet for the bib part of the blouse, and I changed the bib slightly so that it was V-shaped instead of rounded in the front.  I also made the top of the collar higher and left off the sleeves because Edwardian guimpes often left off sections like the sleeves or the back to conserve fabric when they were intended to be worn under other garments.  This pattern was a joy to work with too, and everything went together easily and fit well right off the bat.  It definitely made my task easier, and I would love to try making another version with sleeves at some point in the future. 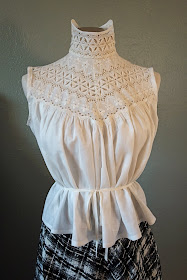 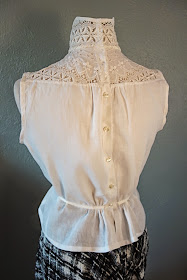 So now that the easy parts are finished, I'm working on the jacket, which has proven to be much more of a challenge.  I'll be back soon to show you how that project turns out!