What's time to a pig? 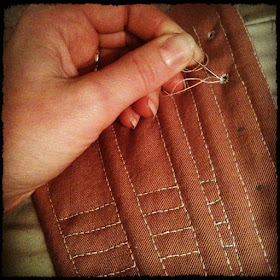 I've been working hard on my hand-sewn 1790's stays for the past few weeks, and I have enjoyed it more than I ever could have imagined. I have always been firmly in the anti-hand-sewing camp in the past. I never could wrap my brain around why people would spend so much effort slaving away on something that would never even be seen. It just seemed like such a colossal waste of time to me, and I thought the only reason that people hand sewed anything was for bragging rights, which doesn't interest me at all.

But I think I finally "get it" now. For me, hand sewing a garment isn't about doing it for the glory or for some ultimate step toward historical accuracy. The thing that I didn't expect to discover is that hand sewing is actually relaxing and fun! OMG - who knew?

When I was in grad school, I once complained to my favorite professor about how long it would take to finish an elaborate printmaking project.  He replied by telling me a joke:


There once was a traveling salesman driving through the countryside, when he observed what appeared to be a farmer holding a pig over his head under an apple tree. Curiosity got the best of him, so the salesman stopped and backed up. Sure enough, the farmer held a pig that was eating apples right off the tree. “Why are you holding that pig up to eat apples?” asked the salesman. “It’s because he likes the fresh apples right off the tree better than the bruised fruit on the ground,” came the farmer’s reply. “I see,” said the salesman. “But I’m amazed. Doesn’t feeding your pig like that waste a lot of time?” The farmer paused, reflected, and finally said, “I suppose you’re right. But then again, what’s time to a pig?”

The moral that I took away from that story boils down to this: what else would I be doing with all of those hours that I was so concerned about? Watching TV? Wasting time on the internet? Playing silly games on my phone? Sitting around thinking about how bored I am?  OR... I could be doing something with my spare time that brings me enjoyment and creates something amazing. Yeah, it takes forever and I could have accomplished the task in a much easier way, but so what? Isn't art worth the time?

It has been truly lovely to work on a project that doesn't have tight deadline.  I've been carrying a piece of my stays in my purse with me at all times, and I stitch a few rows whenever I am bored or have some time to kill.  I've enjoyed having something that keeps my fidgety fingers busy, and it is so cool to see how much my sewing has improved from those first wobbly lines of stitching.  I've even discovered that I can now feel the difference between a sharp needle and a dull one.  Like all good meditative practices, regular hand sewing makes you notice the details and become more attuned with your environment.  I think that is a very cool thing.

After 3 weeks of work, I am now starting on the final stages of this project.  I am currently assembling the pieces and sewing the eyelets, and then I just have to bind the edges and add the lining.  It has progressed much faster than I thought it would, and I am already trying to think of another small hand-work project to fill the void once this one is done.  I've learned that sometimes it is nice to slow down and smell the roses, eat the apples, or stitch the channels.  After all, what's time to a pig seamstress.  :)
at 3:49 PM