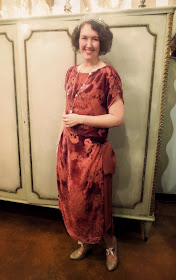 Last weekend, the Dallas / Ft. Worth Costumers Guild held a Tiaras and Top Hats Tea Party, and since I am a complete Downton Abbey addict, I decided to make an early 20's dress and indulge my inner Countess for the day.

I had a little less than 2 yards of voided silk velvet that I bought from Fabrique's remnant bin earlier in the year, and this was just enough fabric to make a simple sheath dress.  I played around with some more complicated pattern options at first, but the fabric was so pretty on its own that I decided to keep it really simple and experiment with the infamous 1-hour dress concept that was so popular during this decade.  There are a couple of fun books from 1924-1925 that talk about making these dresses and give lots of variations on how they can be put together, so if you are interested in learning more, I've included links to those books at the bottom of my blog post.  But since the shapes are really simple, I thought I'd also give you my own freebie pattern so you can see exactly how my dress was made.  (here is the full-sized version if you need it) 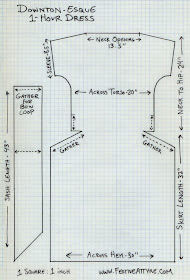 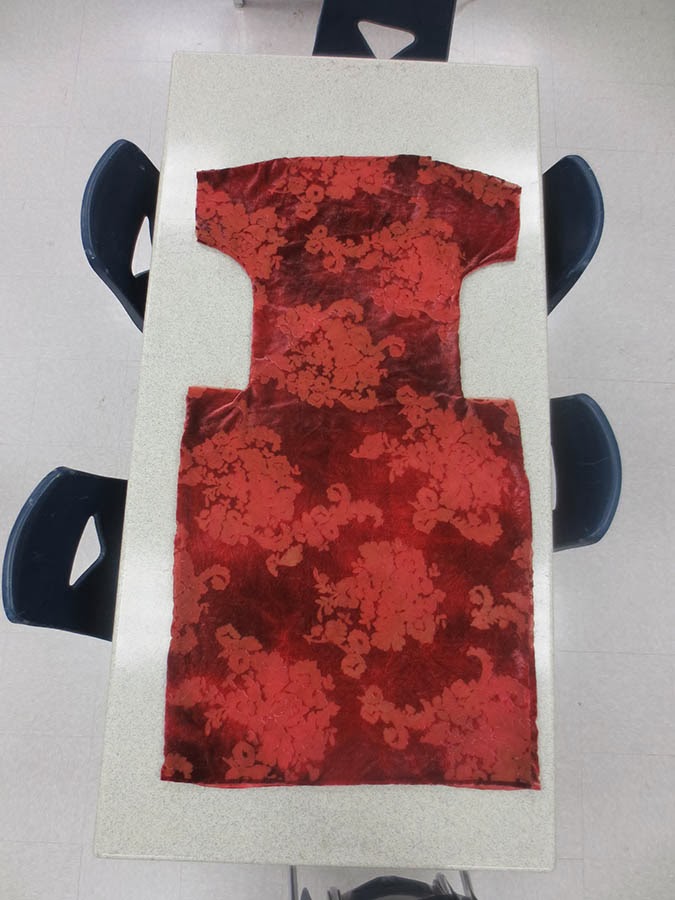 The cool thing about the 1-hour dress is that it is made out of mostly rectangular pieces and just pinned on the body to fit, so it is incredibly easy to draft and make.  The front and back pieces are exactly the same, and I went one step further by using a boat neck on my gown which also eliminated any need for a curved neckline.  These dresses don't look like much when they are laid out flat, but it's amazing how they come to life once they are on the body.  On the right you can see my dress before I cut the angle at the hips, which I did last because I wanted to check the draping before I cut. 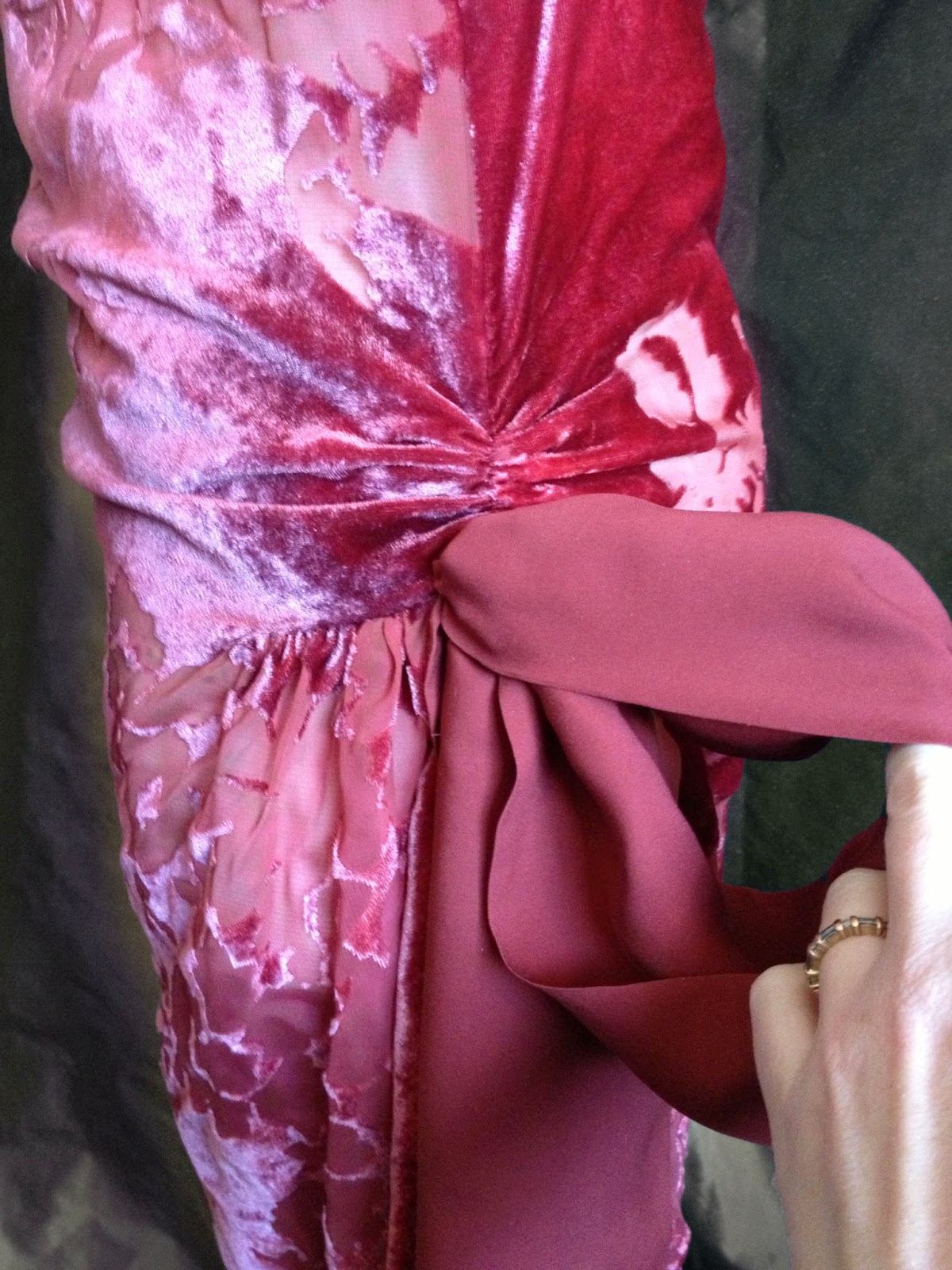 The only real shaping in the dress comes at the hip, which is gathered a little on the torso seam to make some soft folds at the waistline, and then it is gathered at the side extensions to give some fullness over the hips.  I made the hip extensions on my dress slant down, which draws up the sides and gives it a slightly curved hemline and some diagonal draping across the skirt.  I also made two looped sashes out of silk georgette and tacked these onto the hips to jazz it up a little more. 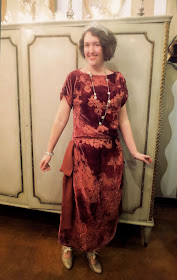 I'm not going to do a full step-by-step tutorial because I think the books cover that well enough if you need more instructions.  But here are a few more of my own impression after making one of these dresses myself:

- I think one of the main reasons why my dress was successful was because of my fabric choice.  You definitely want a fabric that is very fluid and not stiff for this style - something like silk velvet, crepe, soft lawn, etc.  Drapey is definitely good!
- I made my dress quite narrow through the body, which keeps it from looking like a big shapeless sack.  It only has 2" of ease across the bust, and it is just big enough to fit over my shoulders, but just barely.  This narrow width also means that the waistline naturally falls at my high hip (around where I wear my jeans) since it can't go down any farther than that.  This is perfect for an early 20's look, and to my eyes, it is a lot more attractive than the later 20's dresses.  Many of those have a waistline that hits lower on the hips, which results in the whole body needing to be cut wider for us curvy gals.
- The one part about this dress that I wasn't crazy about is that the neckline likes to shift around a lot because the fabric is so slippery.  I tried to combat that by sewing snaps into the shoulders and snapping it to my chemise, but it still moved more than I wanted, so I'll probably try snapping it to a firmly fitted 1920's brassiere next time.
- So did the dress really only take one hour to make?  Uhhh... no.  But that's mainly because the silk velvet forced me to baste everything before sewing, and I took the time to hand-finish all the hems and bind the internal seams.  I probably spent about 4-5 hours on it total.  But if I was making this sort of dress in cotton and machine sewed all the finishing work, I think I could get pretty close to that 1-hour timeframe. 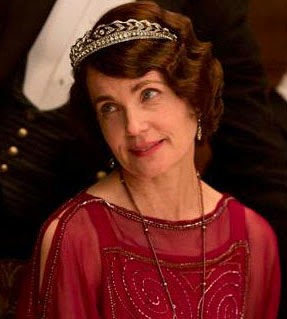 - And just because I am totally in love with my new tiara, I thought I'd let you know that I bought it from Venus Jewelry on ebay.  I think it is a pretty great match for the type of tiara that Cora wears in the latest season of Downton Abbey.  One of the best parts about 20's fashions is all the fabulous jewelry from that era, and I had a ton of fun picking out sparkly things to finish off my outfit!  I wish I had a better non-blurry picture, but maybe you can get the basic idea here. 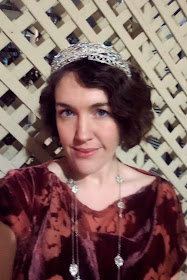 So that's pretty much it!  We had a wonderful time at the tea party, and I am even more in love with 20's fashions than I was before. If you ever need a quick and easy frock for your own Downton Abby adventures, I definitely recommend that you give the 1-hour dress a try! 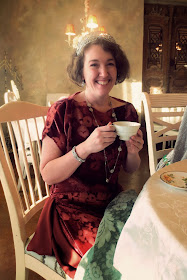